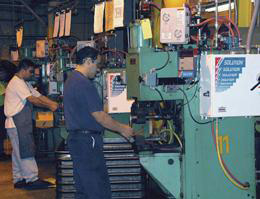 We are pleased to offer the new Unitrol SOFT TOUCH welder safety option. This patent pending function keeps the electrode force very low until it is safe to apply full welding force. This passive fail safe system has been approved by OSHA in manufacturing plants nationwide.

It is standard on the 9180 Unitrol controls series without extra cost. Existing Unitrol controls can be upgraded for this SOFT TOUCH function. It also installs on the entire ENTRON family of controls.

How it works: After initiation, electrodes start to close under low force. A Unitrol touch sensor system decides when the electrodes have closed on or near the metal being welded. If an obstruction is detected prior to closing, the electrodes will go back to the fully opened position. No adjustment of SOFT TOUCH is needed when changing welding force or electrode spacing.

Fail safe system: If the sensor switch is already closed when the welder is being initiated, the electrode will not even start to move, and the display will show which sensor input is closed at that time. If the sensor wires from the SOFT TOUCH system have become disconnected or are making poor contact, the electrodes will close under low force and then return after a short field-settable delay (1-99 cycles).

Redundant sensor: You can also add your own proximity switch or LVD system adjusted to close a switch when the electrodes are less than ¼” apart to the system. The SOLUTION will not turn on the high-pressure valve until both METAL is detected and the proximity switch has been closed. This is often useful for applications where the parts being welded are not flat prior to the weld.